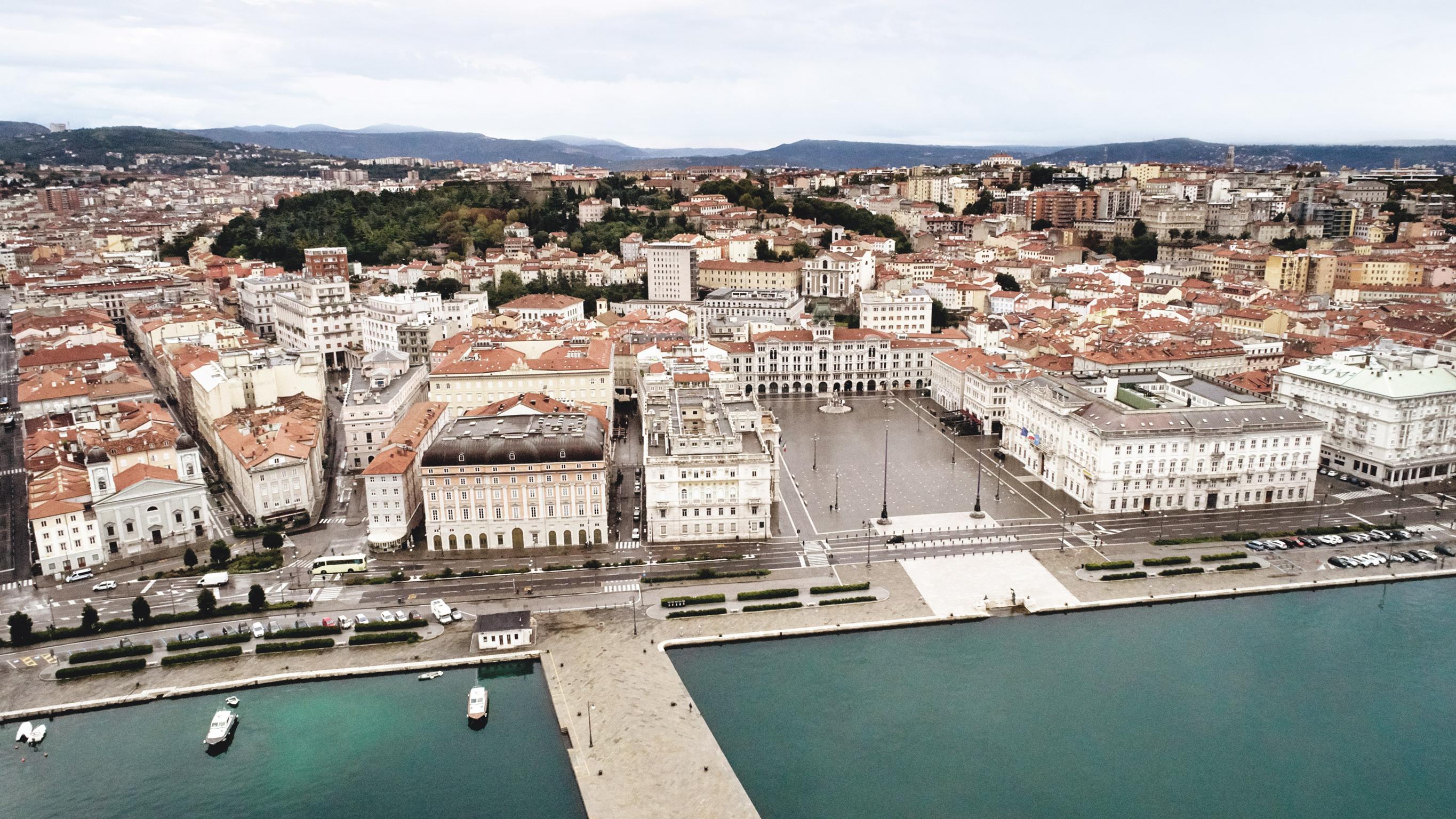 MEET THE IMPERIAL PORT OF THE HABSBURGS-TRIESTE Hello, my name is Marijana and I will be your tour guide throughout Trieste city. I am happy to be with you over the next few hours and I will be glad to introduce you to this wonderful coastal city of Northern Italy. I wish you a wonderful journey through the history of Trieste. Trieste is a place where many religions meet: the main churches have been located for centuries. There are also different architectural styles of its buildings: neoclassicism, secession, and baroque style, harmoniously complement each other, as well as Roman ruins and buildings from the 18th century. The enchanting city Trieste, strtches between the sharp Karst to the Adriatic sea and offers the experience of a unique and unforgettable stay. As a border area and trading port with a turbulent past from ancient times to modern days. Our first starting point will be Piazza del Unita Italia or the main square in Trieste. 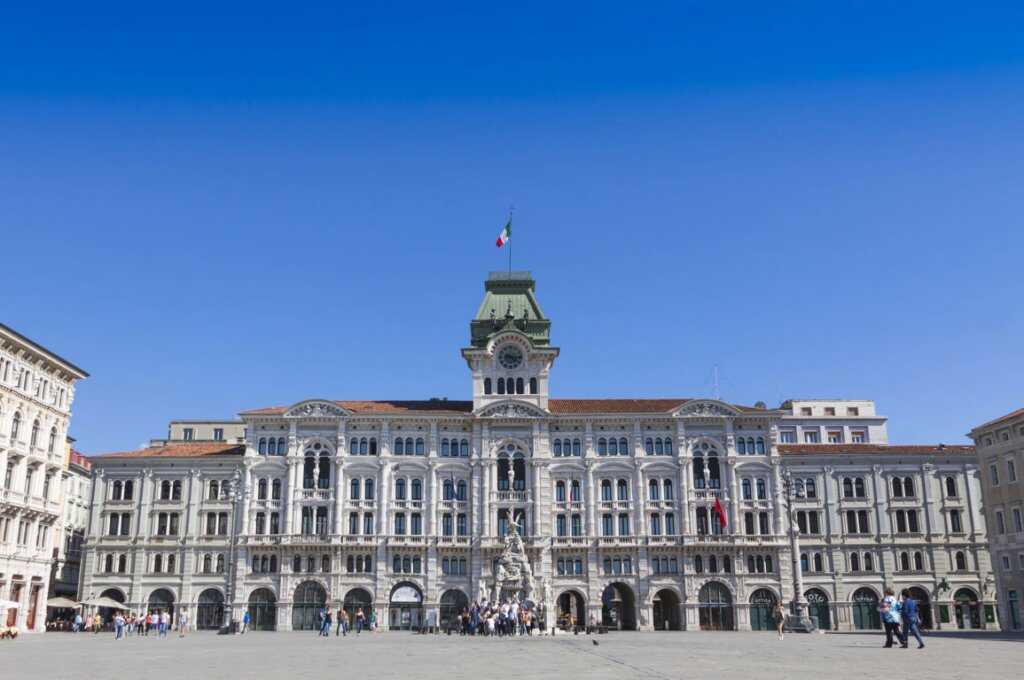 Piazza Unità d'Italia (English: Unity of Italy Square) is the main square in Trieste, a seaport city in northeast Italy. Only a few steps separate the square from the Adriatic coast. If you ask many Europeans, even locals, they will tell you that this square is the largest in Europe. Before 1919, the square was called Piazza Grande. When the ceremonies of receiving high-ranking officials from other countries are organized, it is the president who welcomes another president here. And this is usually on the red carpet. Let's meet in a few minutes near The Fountain of the Four Continents. 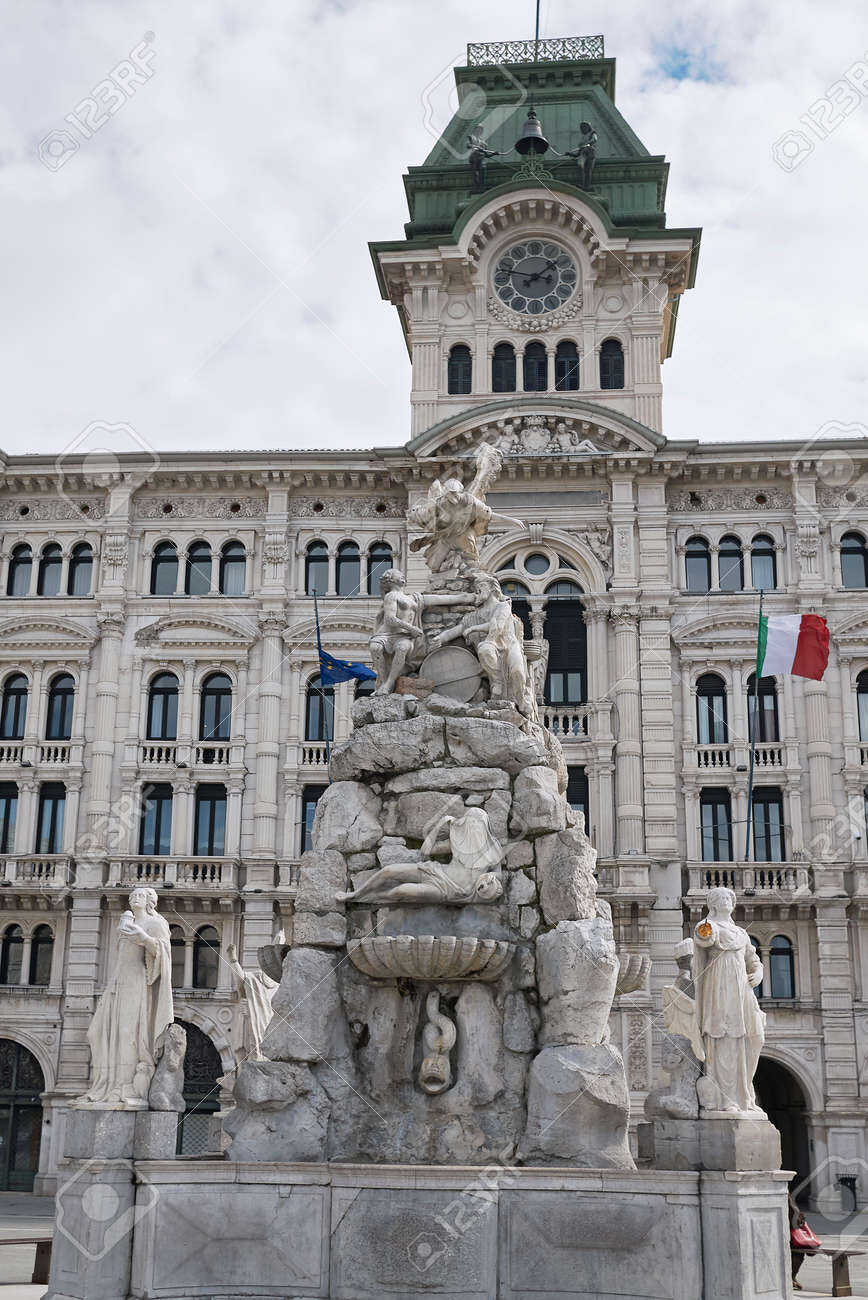 The Fountain of the Four Continents is located right at the Piazza Unita del Italila. The fountain of four continents was created in 1750 by Giovanni Mazzoli. The sculpture is a symbol of four then known parts of the world: Europe, Asia, Africa and America. Going down Via Luigi Einaudi we will find ourselves in Piazza Ponteroso. There I will tell you a little more about the square itself, the famous Grand Canal and the statue built in honor of the Irish writer James Joyce. 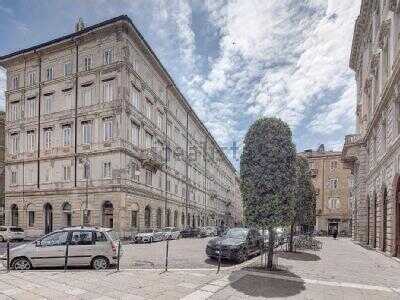 After seeing the fountain, continue along Via Luigi Einaudi, towards Piazza Ponte Rosso. 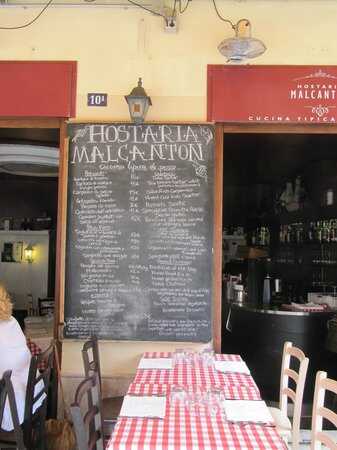 My warm recommendation is to visit the restaurant Hostaria Malchanton which is located in Via della Cassa di Risparmio 3. Here you will enjoy the famous grilled misto, creative and beautiful presentation, expert friendly service! And the best house wine. Try the desserts that are stictly homemade. 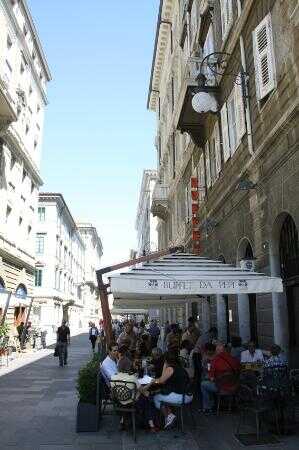 This is the street whose name is Via della Cassa di Risparmio. You will pass this street on the way to Piazza Ponte Rosso. Hostaria Malcanton Restaurant is located on this street. 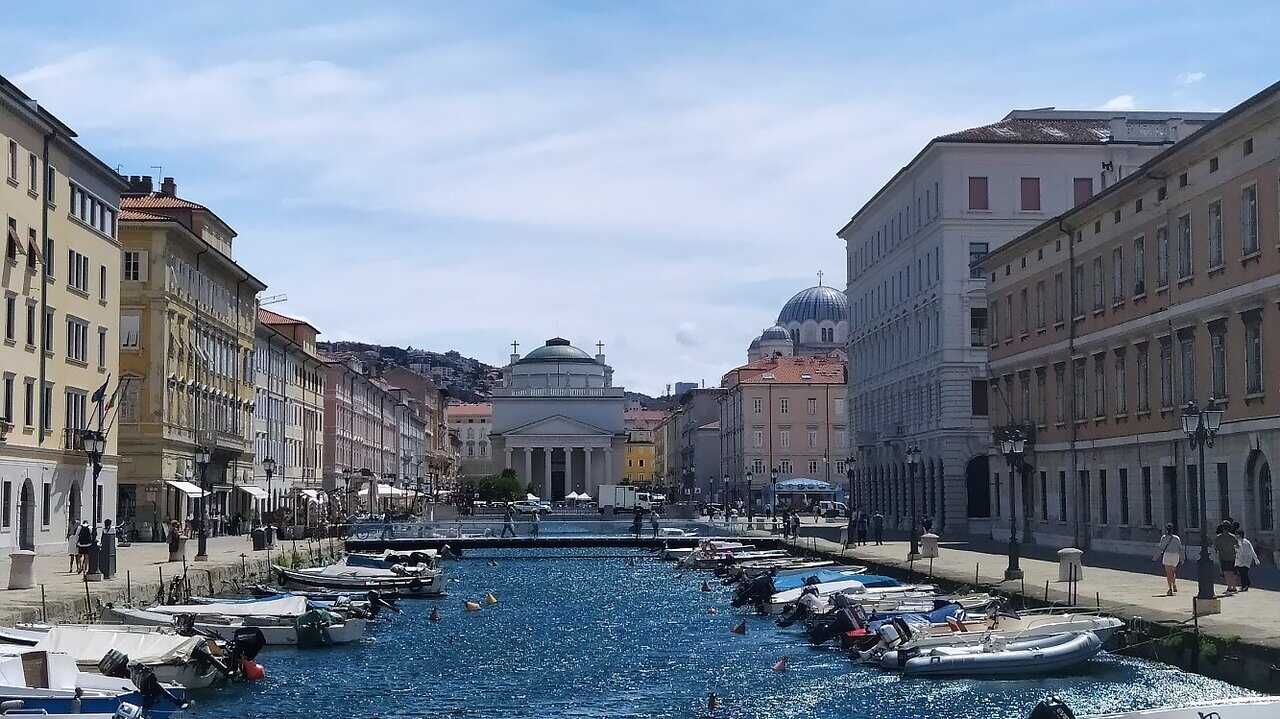 Piazza Ponteroso or Red Square has historically been known as a market where fruits and vegetables were sold. It was at this place that the workers brought goods from the port. Today the square is known for good boutiques and restaurants. Here is the famous Grand Canal that connects the square with the Adriatic coast. The square is also adorned with the Giovanini Fountain, a statue of the famous Irish writer James Joyce. Enjoy the view and take the time to take pictures, great photos can really be taken here. You can also drink coffee or the famous Italian freshly squeezed red orange in one of the nearby cafes with a long tradition, say James Joyce cafe bar is one of them. . And then see you in front of the church of St. Spyridon. 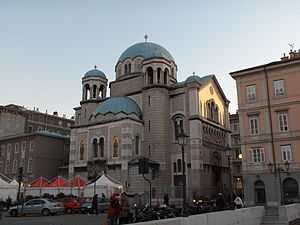 Church of St. Spiridon is located in the very center of Trieste, in Ponte Rosso Square, and is dedicated to Saint Spiridon, the miracle worker, patron saint of shoemakers and leather processors. The Christian community in Trieste was established in 1748, and in 1781 the community was divided into two parts - Greek and Serbian. The construction of the temple began in 1861 according to the project of Carlo Mancini, and was completed in 1885, receiving 1,600 believers. 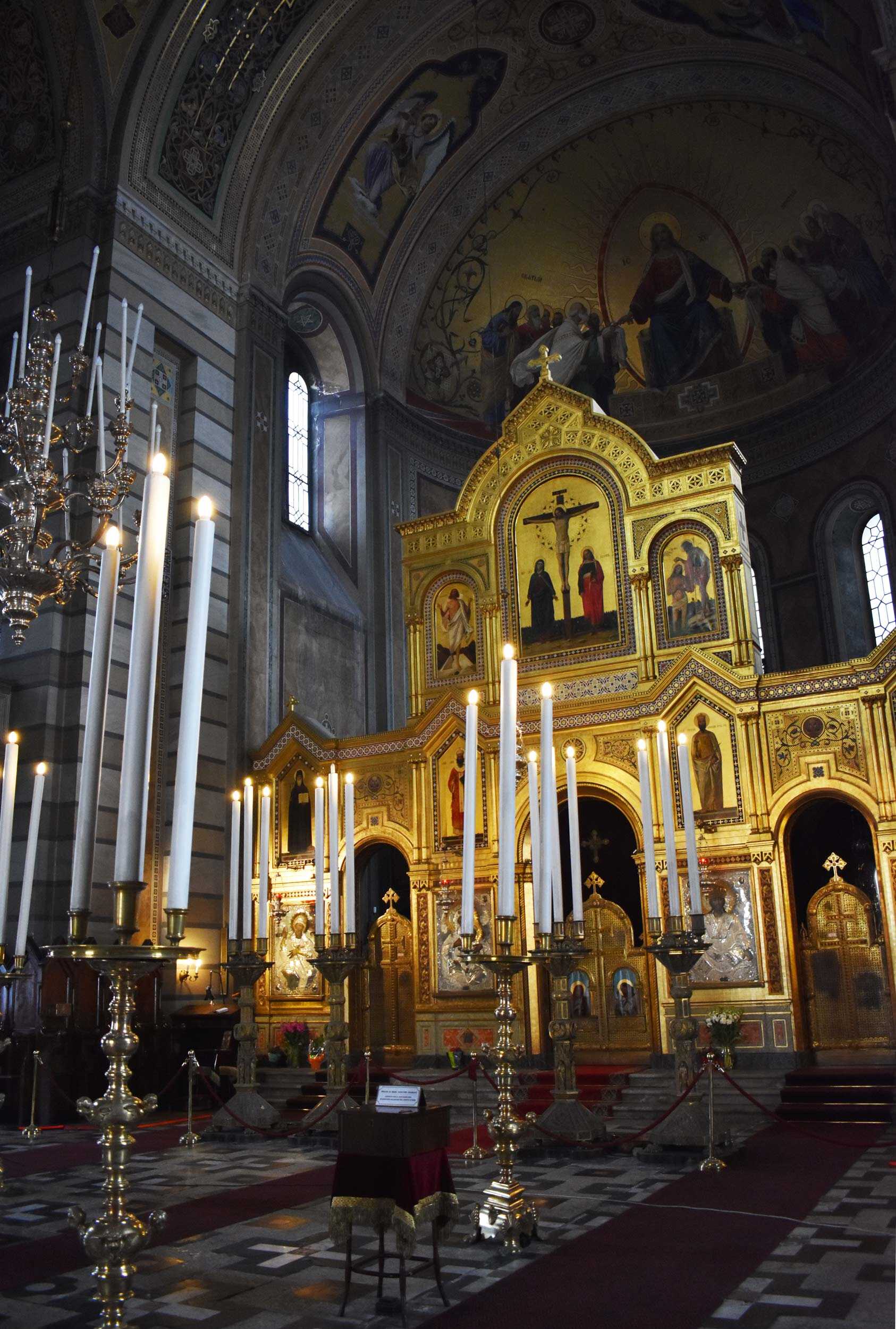 The interior of the temple is magnificent, the dome depicts Christ the Panther in the starry sky, and a large silver lamp, a gift from the Russian Tsar Paul I Romanov and a gold-framed Gospel, a gift from the Russian Princess Julia Samoilova, stand out. There are eight large candlesticks in the nave of the temple: four are a gift from Jovan Kurtović from 1763, and four with the symbols of angels, evangelists and St. Spiridon was a gift from Risto Škuljević in 1899. Interior decoration was performed by Giuseppe Bertini and Antonio Correone. 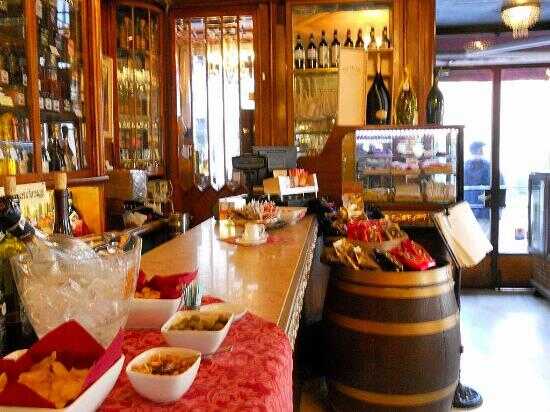 As you move on to our next meeting point, I recommend you take a break from walking and sort out your impressions at the Antico Torinese coffee bar. Enjoy the famous espresso or cappuccino and peace of Cheese cake. After refreshments, we will meet in front of the Cathedral of St. Giusto. 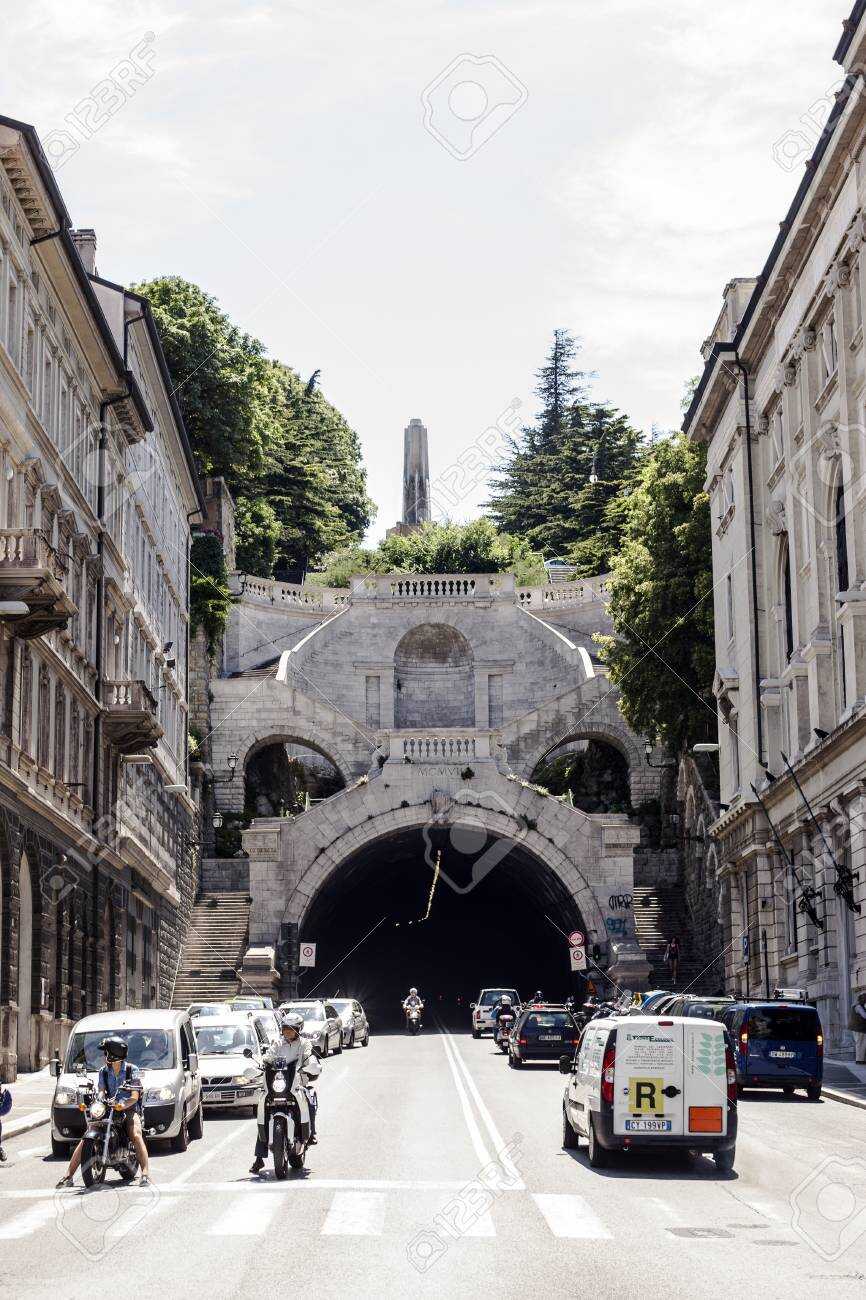 Piazza Goldoni is just a square that you will pass at your destination and it is San Giusto castle. The square is full of restaurants, shops, and a newsagent (selling transport tickets).Someone called this square the center of the city. Certainly from a geographical point of view it is. But perhaps more than a geographical center, Piazza Goldoni could be seen as a border square between the popular part of Barriera and the other part of the historic center. The first with its intense coming and going of mostly elderly people who come and go from shops, from the covered market, from Grassilli, from the many "bars" where to refuel. The second with a more youthful and less "triestin-popular" face. More working, but also more lounging. Piazza Goldoni is the border between these two Trieste, a marshalling yard, a station where you can get off the bus to go to one or the other Trieste, to embark and return home. From here pass the main (in the sense of crowded) bus lines of the city. 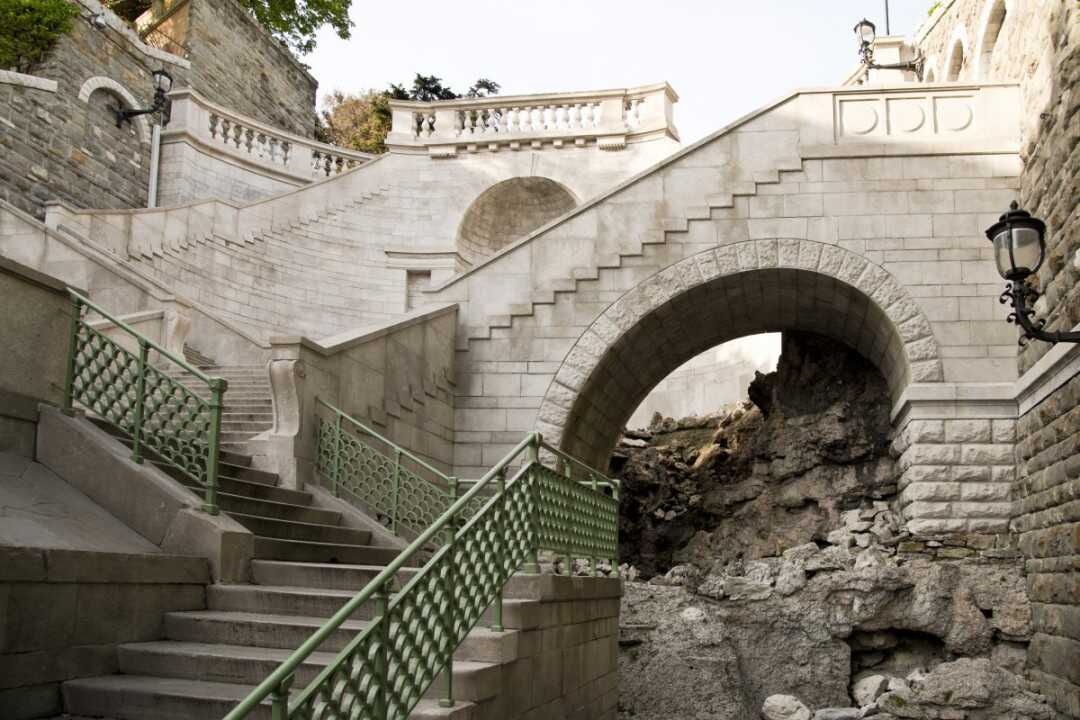 While you are going to our next point, pay attention to the fountain Montuzza. It is located above the Sandrinelli Gallery with the Scala dei Giganti, was built in 1938 by the Buttonaz and Ziffer company based on a project by the municipal technical office and designed by Eng. Vittorio Privileggi, on the occasion of the Duce's visit to Trieste. The structure develops on a circular tank with an external radius of 6.50 meters, with a bottom covered in polished concrete grit, and a central body with a pentagonal obelisk with constructions, made of reinforced concrete and covered with slabs of Orsera marble. At the base of the obelisk there is a second pool, concentric to the first, from which five illuminated waterfalls descend and flow into the main pool. Destined to have a short life (it should have been dismantled at the end of the celebrations), it survived inoperative the Second World War and the subsequent post-war events. The last functional restoration was in 2006, while previously it dates back to the early 1970s. 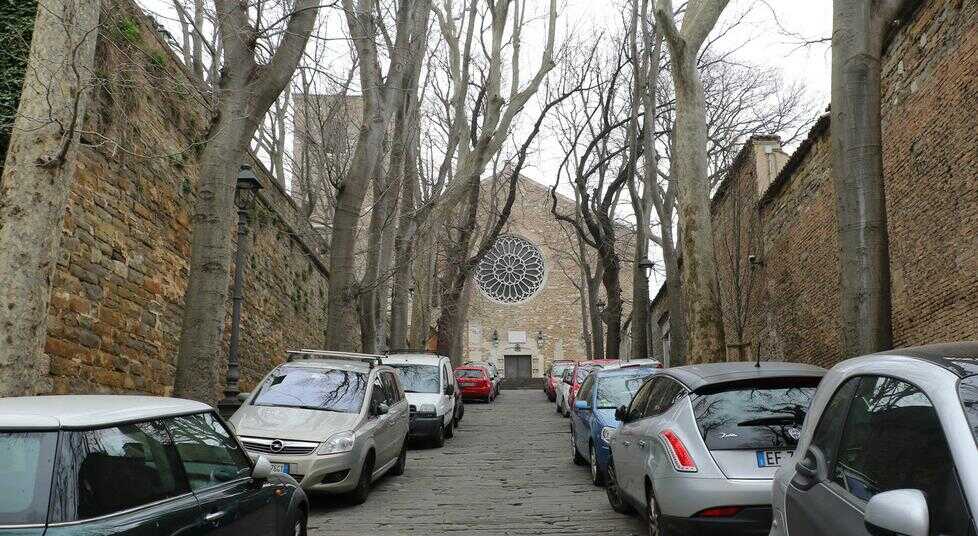 As you continue towards the castle of San Giusto, you will notice the cathedral, which is actually the main cathedral in Trieste. Trieste's Cathedral ( Basilica cattedrale di San Giusto Martire) is dedicated to Saint Justus, is a Roman Catholic cathedral and the main church of Trieste, in northern Italy. It is the seat of the Bishop of Trieste. In 1899, Pope Leo XIII granted it the status of a b basilica minor. Here is a mausoleum dedicated to the Carlist family, claimants from Spain. We will end our sightseeing in the castle of San Giusto. Get ready for a nice view of the city from the castle 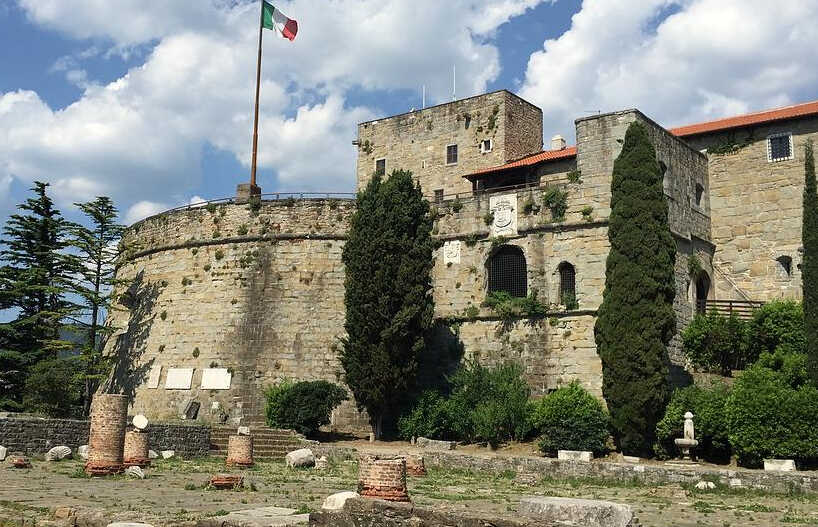 On a steep hill above the city center, lies one of the two famous Trieste castles. It was built by the Venetians during the Middle Ages on the site where the Romans still had their fortress. During the struggle for power, it was overthrown in the 14th century, to be taken over by the Habsburg ruler Friedrich II. restored in the second half of the 15th century. Later, it was additionally strengthened, so even today it looks massive and powerful. In front of it are old pillars and stones, dating back to Roman times. The castle itself is not particularly interesting from the inside, so tourists mostly visit it because of the great view of the city and its surroundings. If you are not interested or you just need a view that you can enjoy on the way to the castle.Enter the castle via a wooden drawbridge that passes over a small moat to an arched vestibule. This leads to the Cortile delle Milizie, a vast courtyard surrounded by imposing bastions and towers. Here I want to thank you for your time and attention. I really hope that you enjoyed the tour of Trieste and that everything you have seen so far has led you to come to this beautiful city again. What I can suggest to you is to rent a car and visit the Castelo del Mare, which is some 20 km away from the city center. It was my pleasure to guide you through the history of Trieste. See you on one of the next tours! All the best! Ciao, apresto!