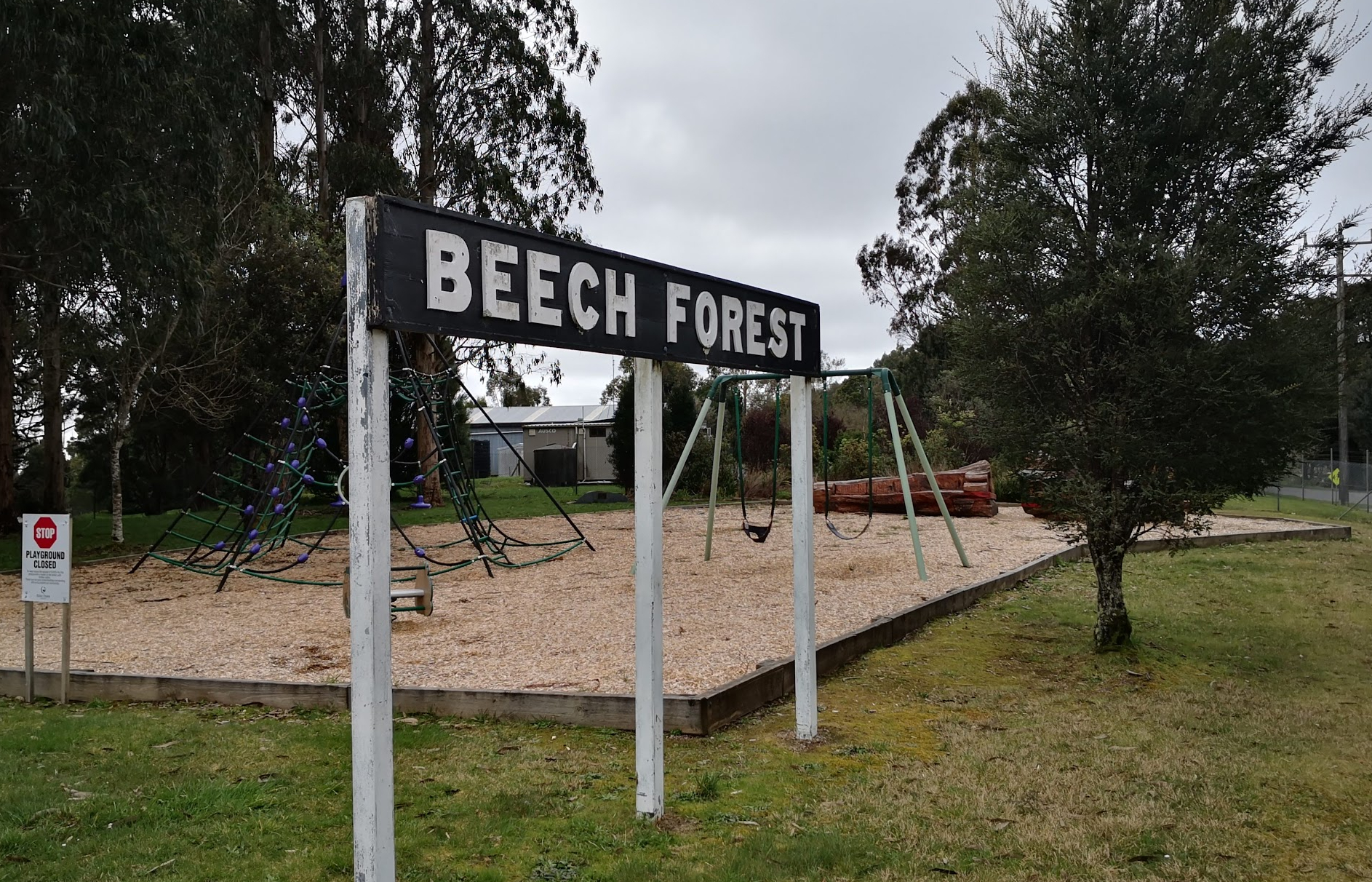 Breathe in the pristine scented rain forest air. Take a leisurely stroll and experience: ∎ The fascinating history of rail and timber in the Otway Ranges. ∎ Walk along the Beechy – Crowes Rail tracka fern glade. ∎ See incredible tree sculptures. ∎ Marvel at how steam locomotives were turned around. ∎ Drop into the Beechy Hotel or the Fergusson Nourished for a refreshment. Need to know: ⌚ Duration - 1.5 hours ♥ Ease - established paths and gentle inclines. ☁ Weather - generally 3 degrees cooler than Melbourne. 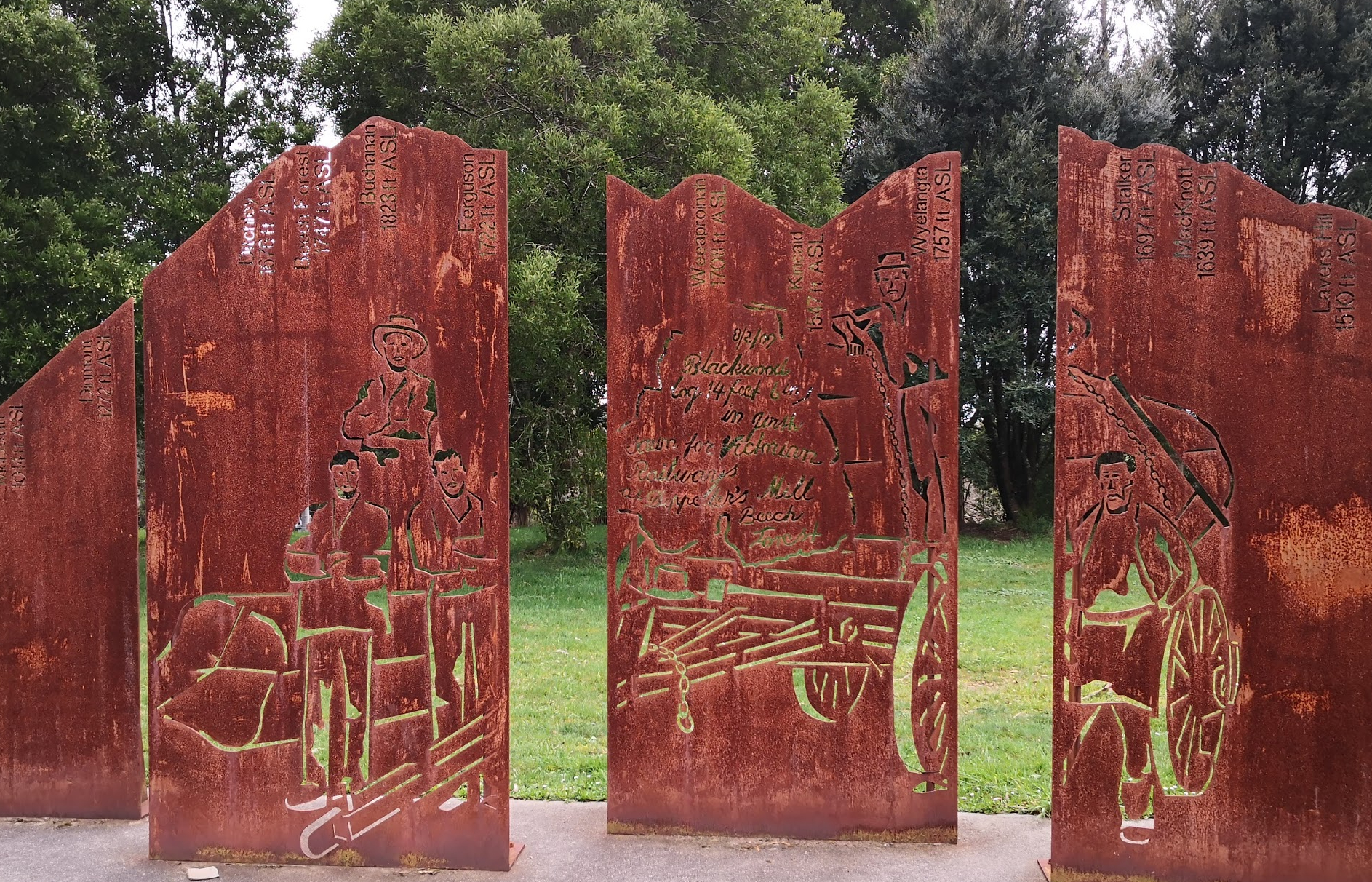 Time to stretch your legs, and take a rest break. Wander around the Information and History Centre. To the right side is an engaging photo display covering the history of timber and small gauge rail in the Otways. Also there are great photos of surrounding scenery and local waterfalls. To the left of the Visitor Center is an impressive iron silhouette, worthy of your close attention. We might ask a Quiz question about this. Then walk along the concrete path in an easterly direction. To your left you will see a small playground. A bit further back is the original Beech Forest lockup. The door is open. Imagine spending time as a fugitive. Very basic conditions indeed!. Keep walking east, soon you will see your next tour point, the Beechy Hotel. Grab 30 seconds and get your directional bearings. Click on the 360 degree panoramic video clip below. 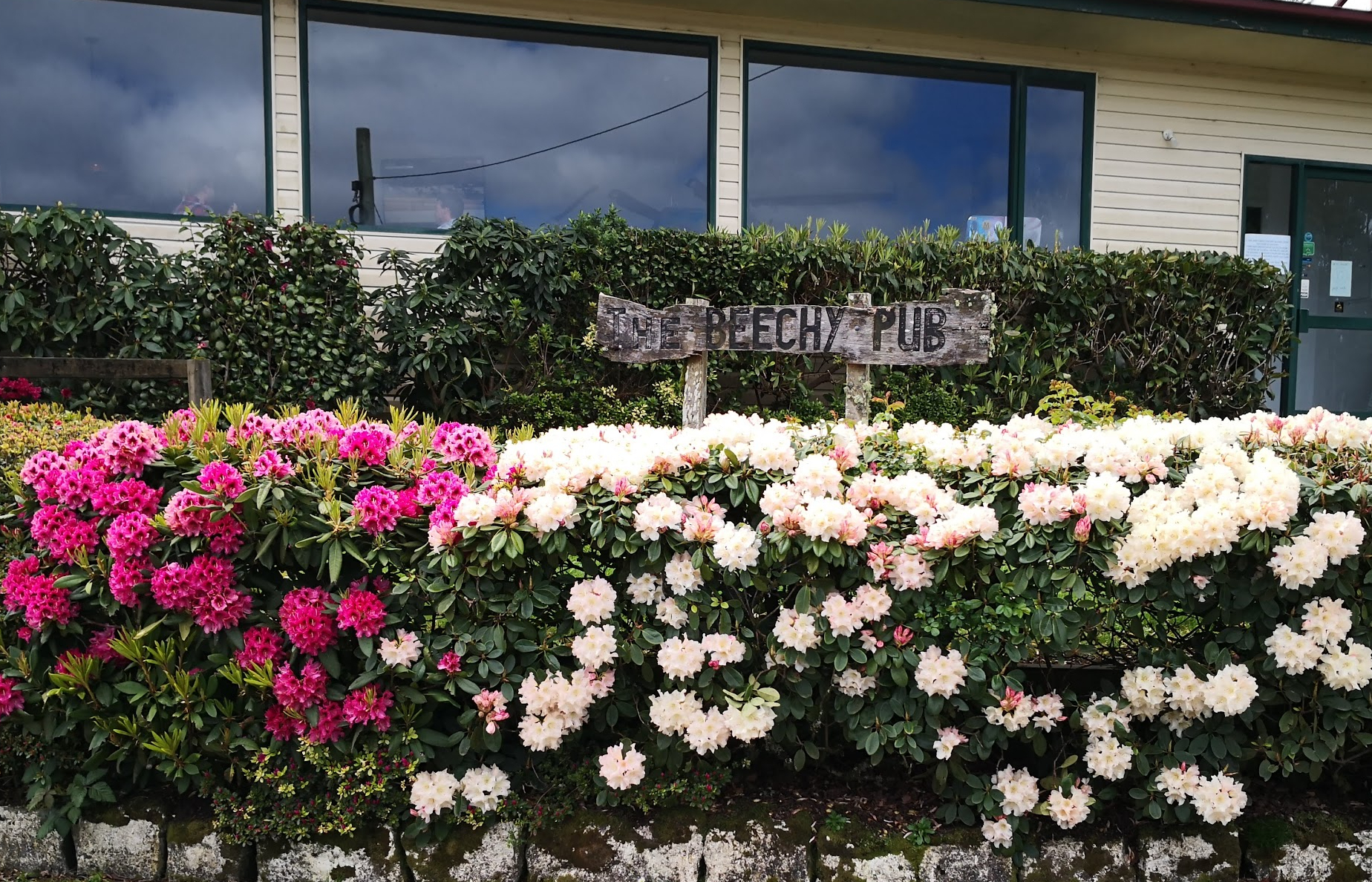 The Beechy Hotel is synonymous with the history of the Otways. The first pub was built in 1888. There is a local myth that J.W. Gardner, who built the Hotel, reputedly constructed the 14-room building using the timber from a single giant mountain ash. * Through the 1890s Beech Forest became a major timber centre. At one time there were reputedly 29 timber mills in the district. * In 1902 a narrow gauge railway from Colac reached the town. * In 1911 the Beech Forest railway was extended to Crowes. At the time it was the longest narrow gauge railway in Victoria. The railway provided transport for local timber (beech myrtle, blackwood and Mountain Ash) were cut down. * After World War I the town became a major centre for potato production. * In 1919 a bushfire destroyed the town and the Beechy Hotel. It was rebuilt to the east of the original site. Its was partially damaged by fire in the 1960s * The railway through Beech Forest closed in 1962. * Today it is surrounded by pine plantations which sustain the local timber industry. From the Beechy Hotel, follow the Main rd east, to the chainsaw sculptures. 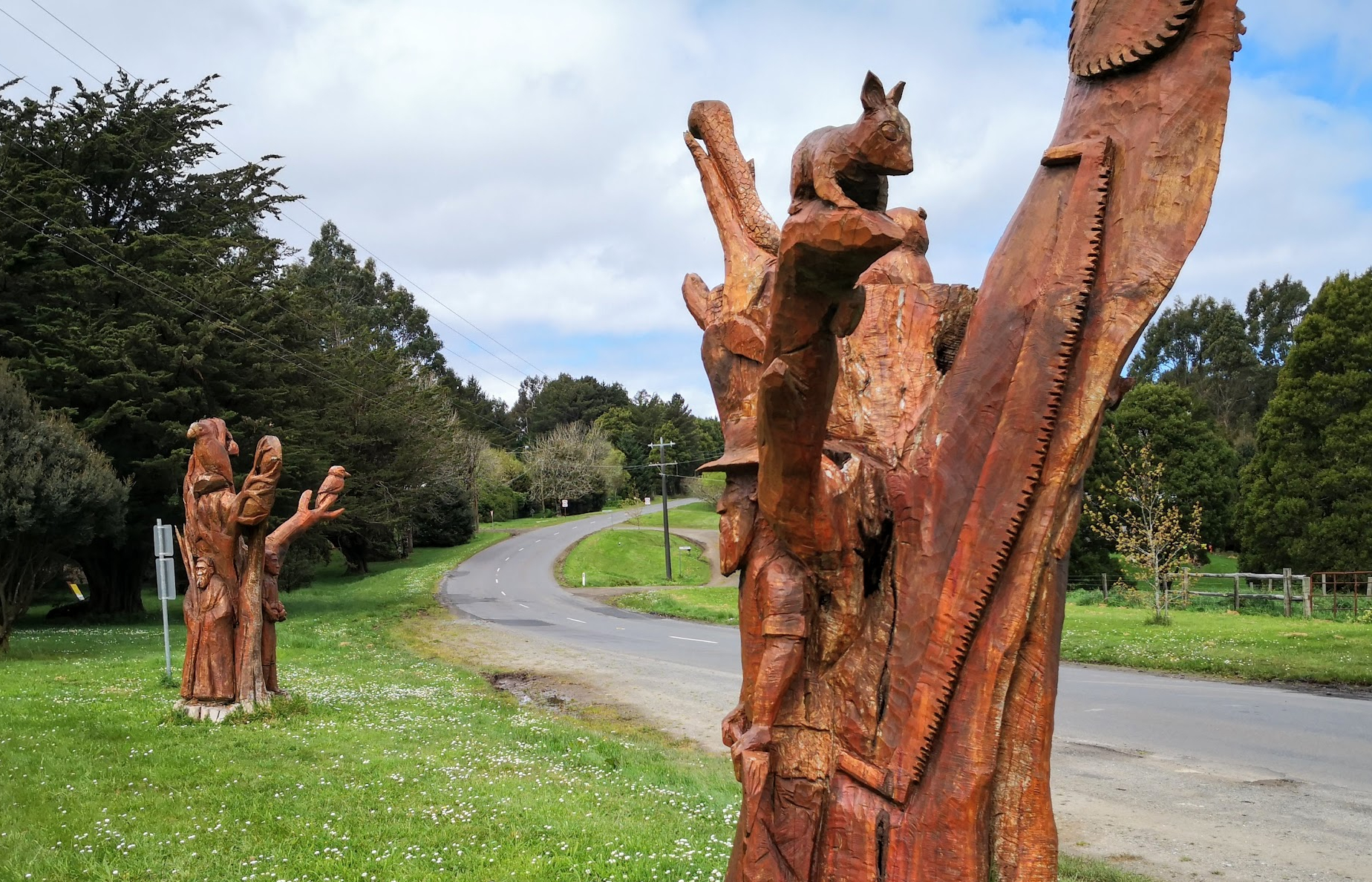 Marvel at the fine detail in these sculptures created using a chainsaw. How many different features and aspects to life in the Otways can you identify? The link below will show you more of the artists sculptures. A short few steps away is Southorn Street. Notice the loop cutting to the right of the old tennis courts. This is where trains coming up from inland Colac turned around to return or go to Lavers Hill / Crowes Just ahead you will see a rusting tractor. Turn left into Southhorn Street. 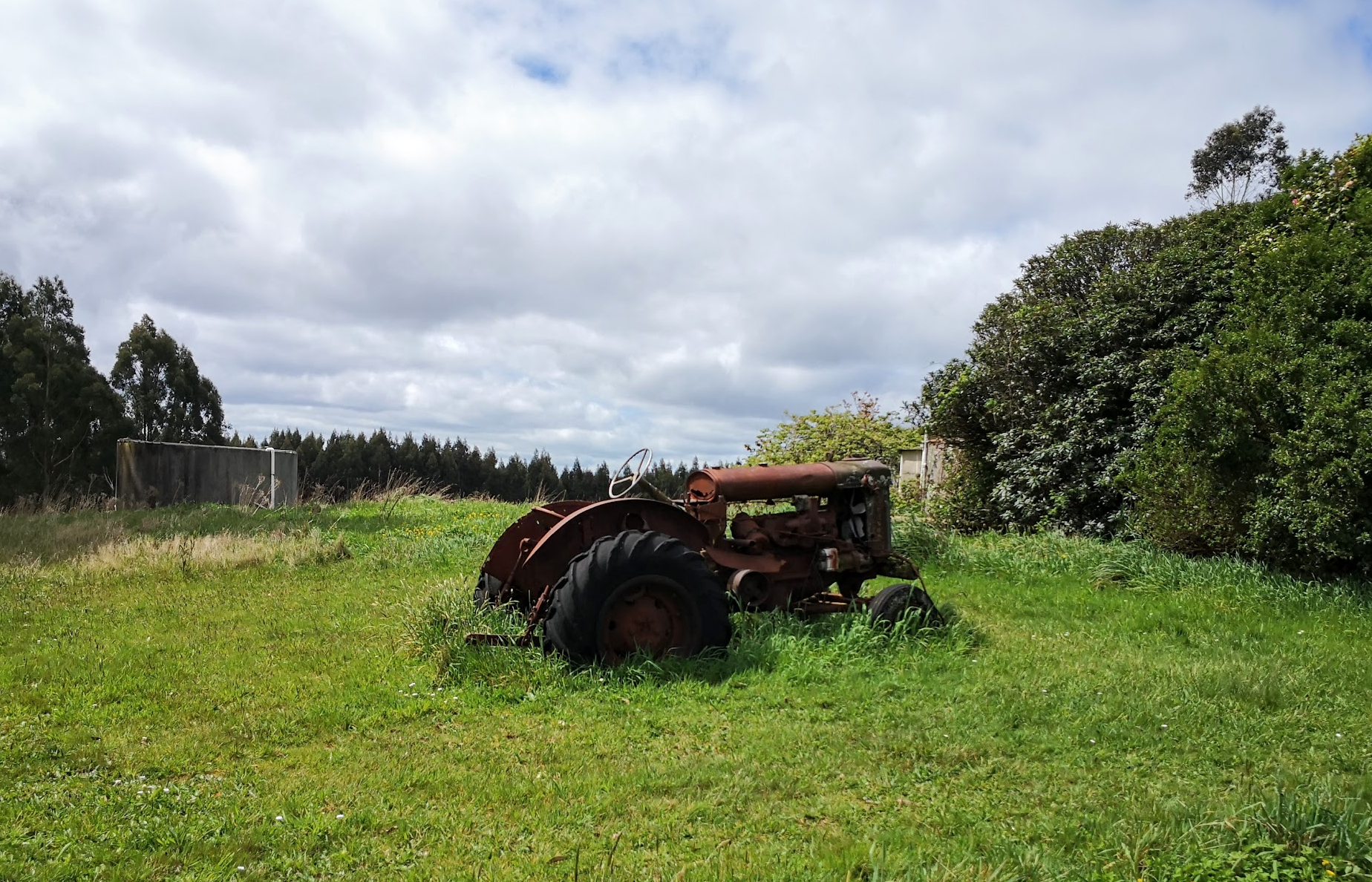 The rusting tractor is a symbol of the potato farming that dominated the area after the timber industry declined. Southhorn St was once the principal thoroughfare with shops and services. On the hill to your right is the remains of the old nursing station. Further along you will see the brick remnants of a hotel cellar. As you walk along Southorn street you will see the old (now a private residence) Station Masters house to the left. Keep walking along Southorn street. Look for an overhead water fill. You have nearly reached your next tour point. The Three Trees 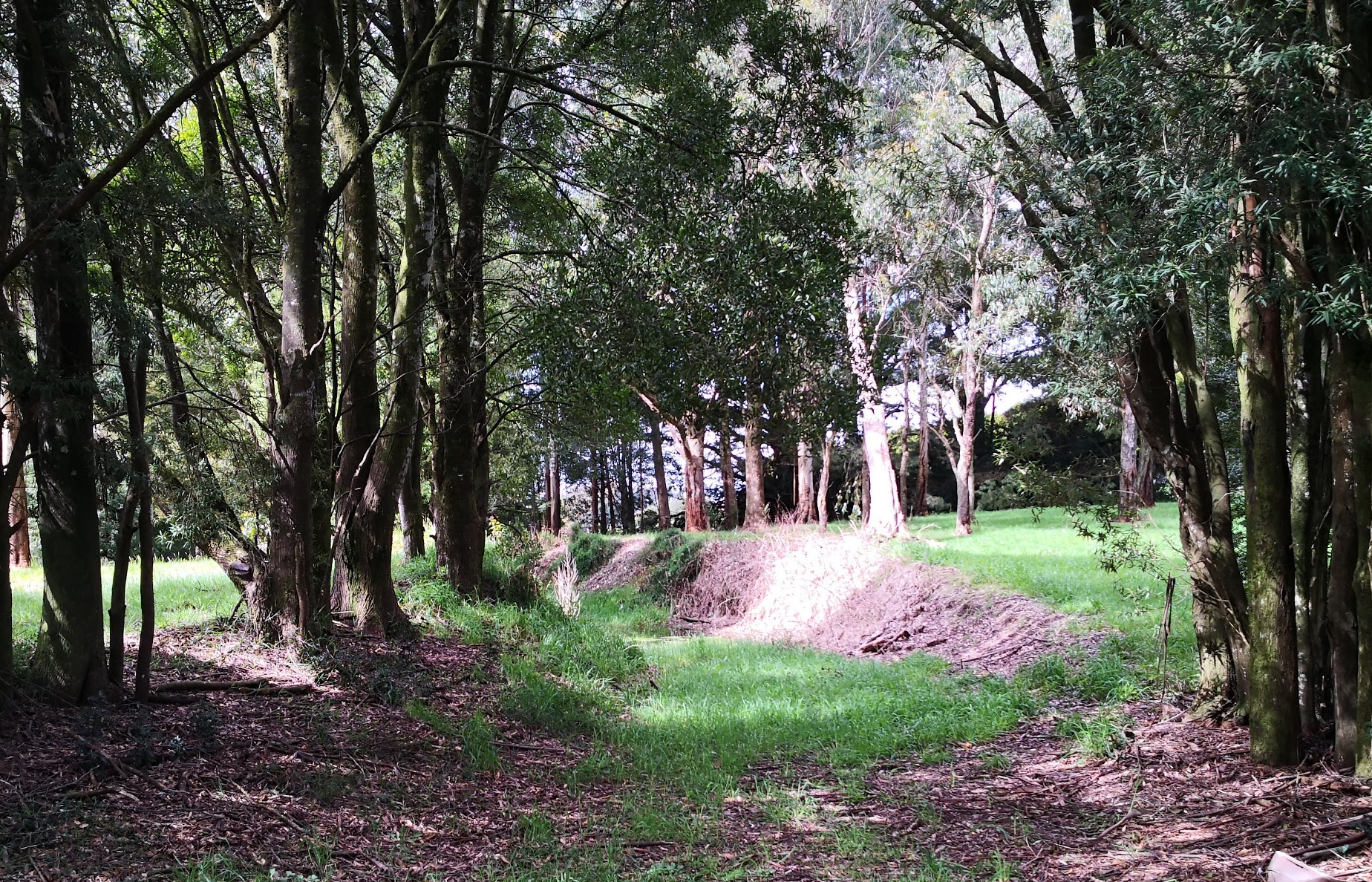 Every wondered how trains are turned around? In most cases massive steel turntables were used to turn locomotive engines so they could return to their base station. At Beech forest a circular loop was constructed. You will see the embankments to your left. As you emerge from the bend, get ready for a ..... 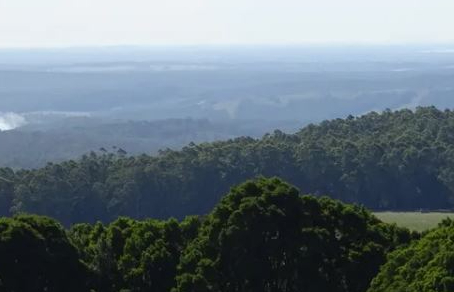 Spectacular view to the north, isn't it?. On a clear day you can see Mt Elephant and the western Victorian volcanic lakes region. Your next tour point is 350 meters along. 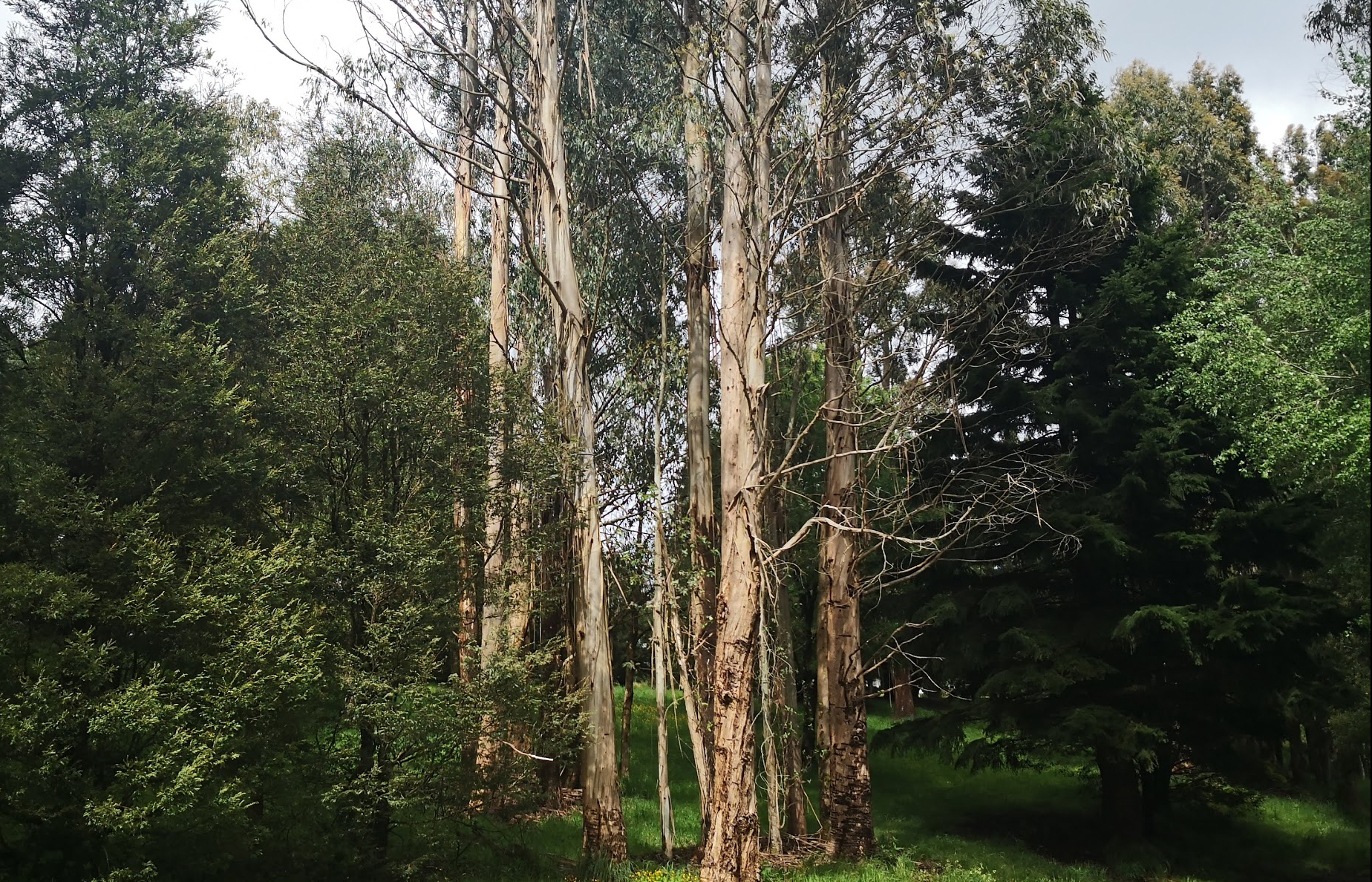 Take a moment to appreciate the trees. They offer excellent examples of Beech Myrtle, Mountain Ash and Pines. Each tree could be seen as an epoch in the history of the Otways. Myrtle Beech is an ancient rainforest species. Interestingly Myrtle Beech trees are found in New Zealand and Tasmania. This is proof that Australia and new Zealand were once joined together as a super continent (Gondowana Land) some 300 million years ago. The tall clean barked mountain ash trees are the symbol of the timber industry that thrived in the 19th and 20th century. Such trees were the mainstay of the construction and housing sectors. The pine tree represents more recent timber plantation logging in the Otways. You will often see large areas of planted or harvested trees as you drive around. Logging trucks on the roads show the ongoing importance of Otway timber for construction industries. Continue along Southorn St. 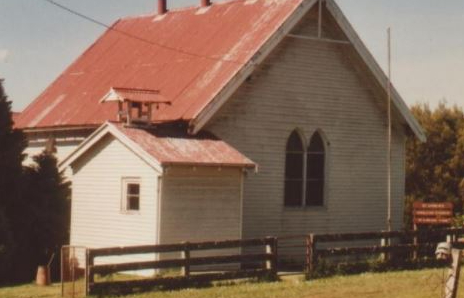 To your right is a small gallery in what was previously a church. Check to see if it is open. Continue up the slope and cross the main rd. Look for a boot. 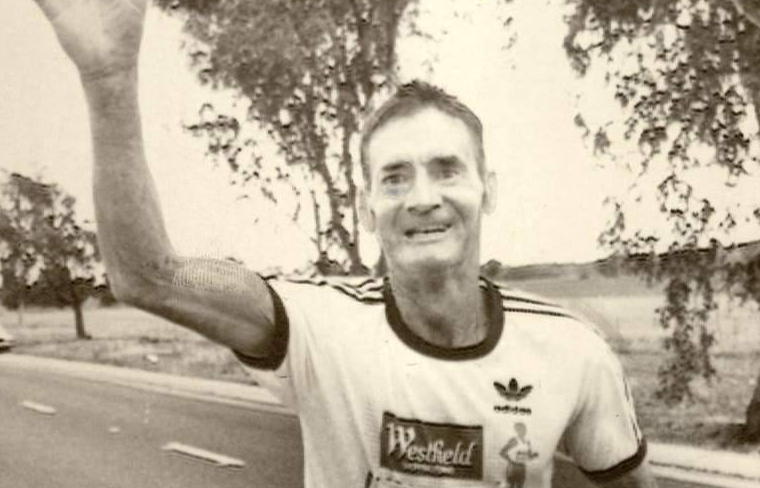 When unknown 61-year-old Beech Forest farmer Cliff Young shuffled off his farmland and defeated 10 professional runners in a 875 kilometer race — a legend was born. The story of a scrawny, socially awkward farmer who trained in gumboot galoshes chasing dairy cows and won Australia’s 1983 Sydney-to-Melbourne Ultra Marathon in Forrest Gump fashion is all true. In 1983, the Sydney-to-Melbourne race was considered one of the world’s most difficult physical tests: 875 kilometers (544 miles) of flats and hills that would take six or seven days to complete. Contestants could eat and sleep as they chose; first across the line took a $10,000 prize. The field included professional marathoners with corporate backing, including one, Siggy Bauer, who had previously set the 1,000-mile world record in South Africa. Keep walking in a westerly direction. Looking south, you can see the Southern Ocean on a clear day. Look for the Old Beech Forest Crowes Railway Line sign and continue along the gradual inclined path. In about 300 meters you will enter a mossy fern glade 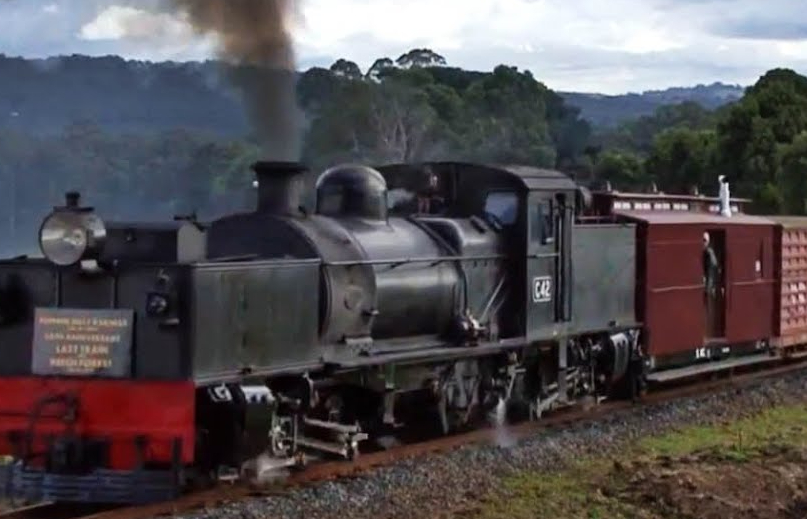 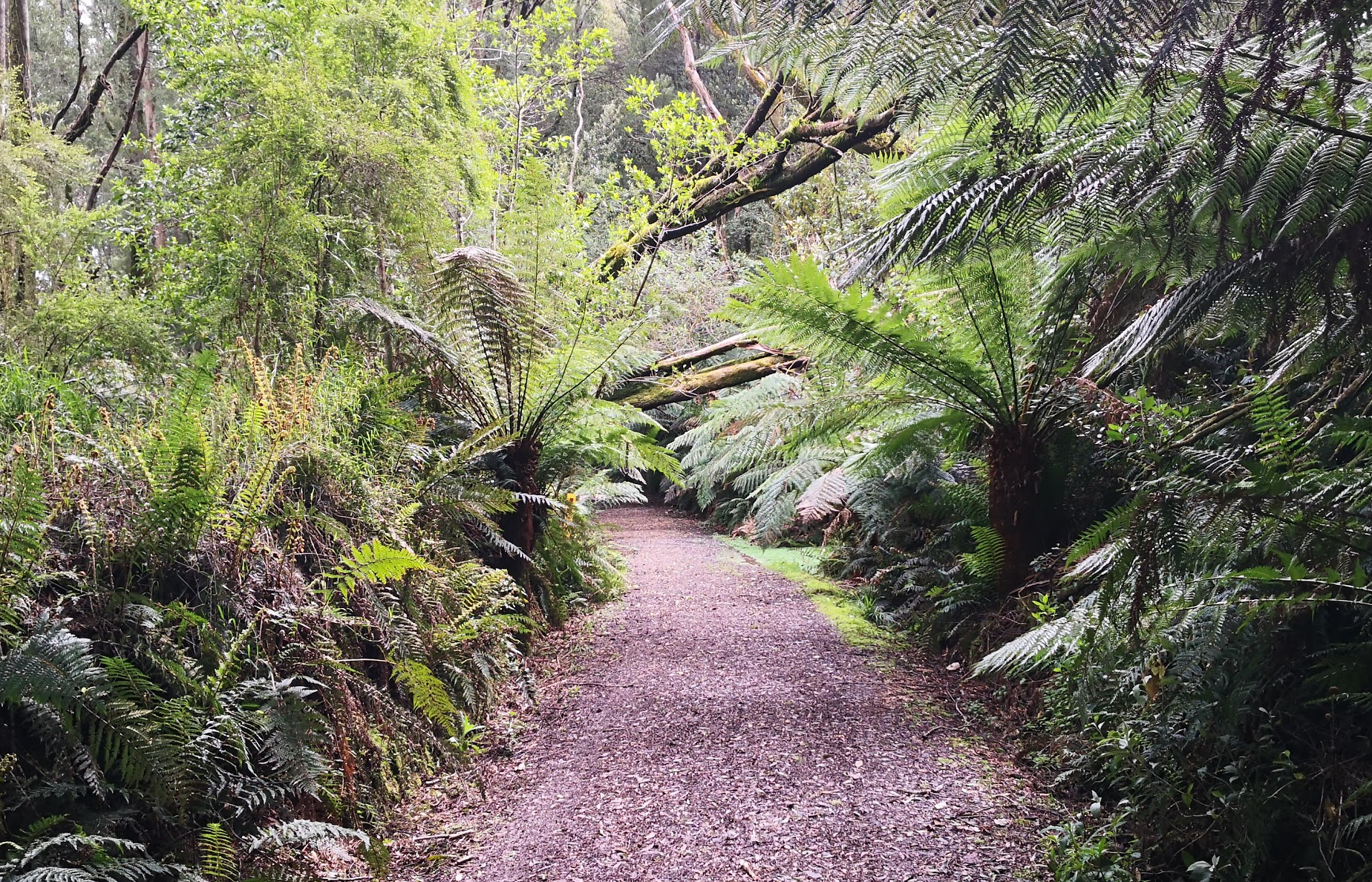 Take a moment to imagine yourself as a passenger on the narrow gauge steam train as it chugged through this idyllic setting. On reaching the end, Re trace your steps back to the Visitor carpark where a Quiz awaits you. 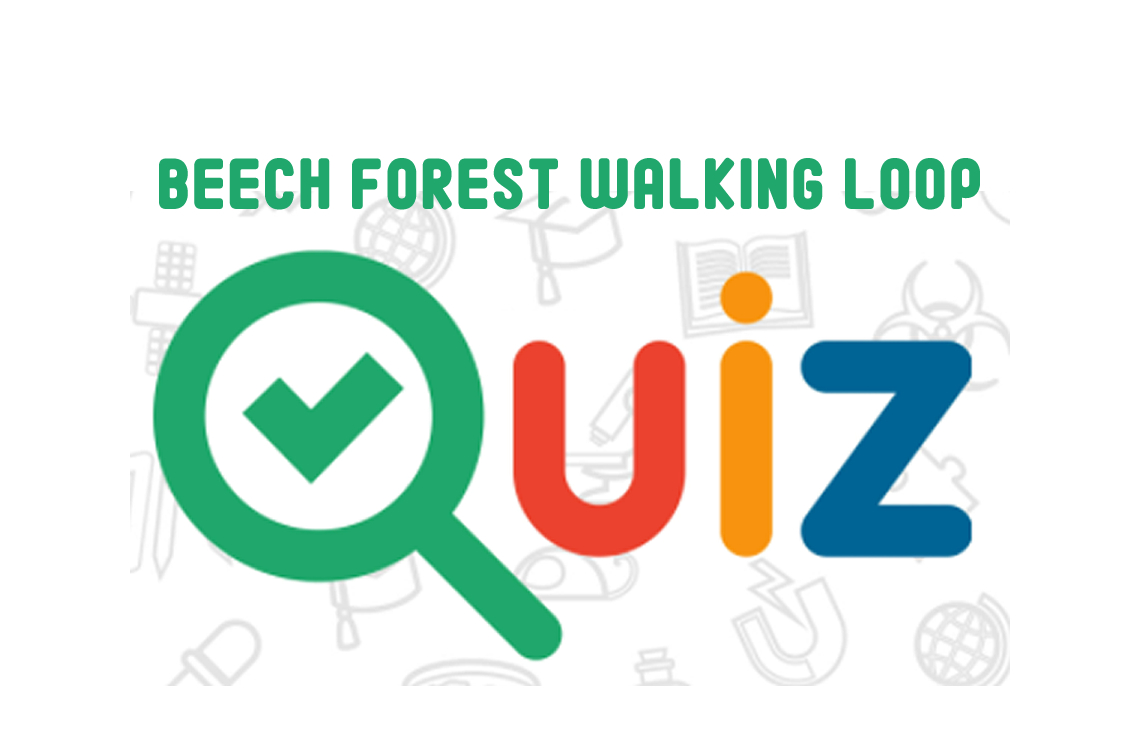 Click the link below to take a quick quiz. Have fun. We hope yoiu enjoyed the Beech Forest Walikng Loop. Please LIKE and share if you enjoyed the experience