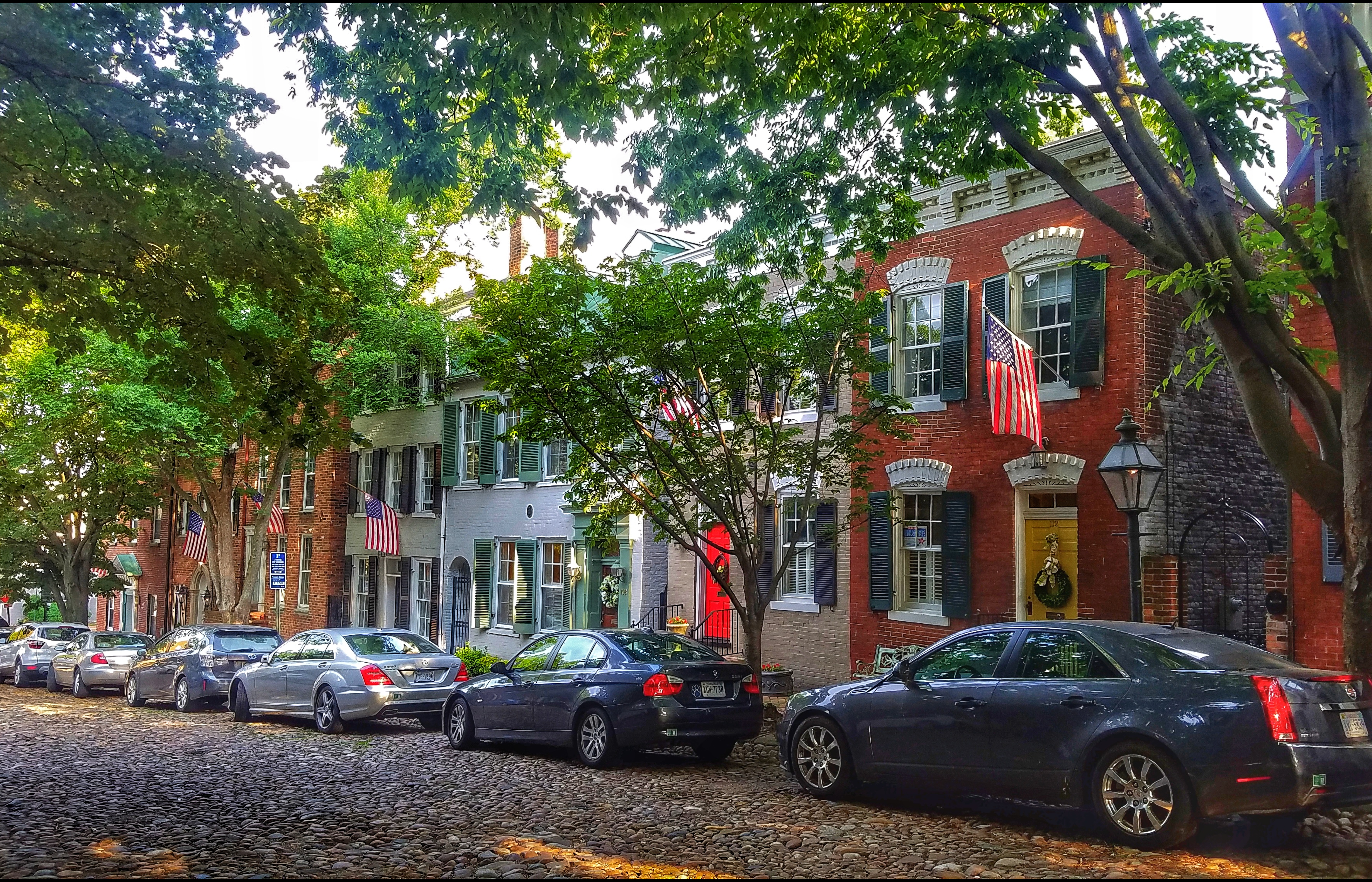 Welcome to Old Town Alexandria! I’m glad you can join me. I’m Christian, your guide and this walking tour will explore a handful of the many historic sites associated with the town’s most famous resident, Revolutionary War General, First President of the United States, and farmer George Washington. Washington enjoyed a fruitful 50 year relationship with Alexandria, from the town’s founding in 1749 until his death in 1799. We’ll begin in the vicinity of the George Washington Masonic National Memorial and work our way down to Old Town’s Waterfront Park along the Potomac River. 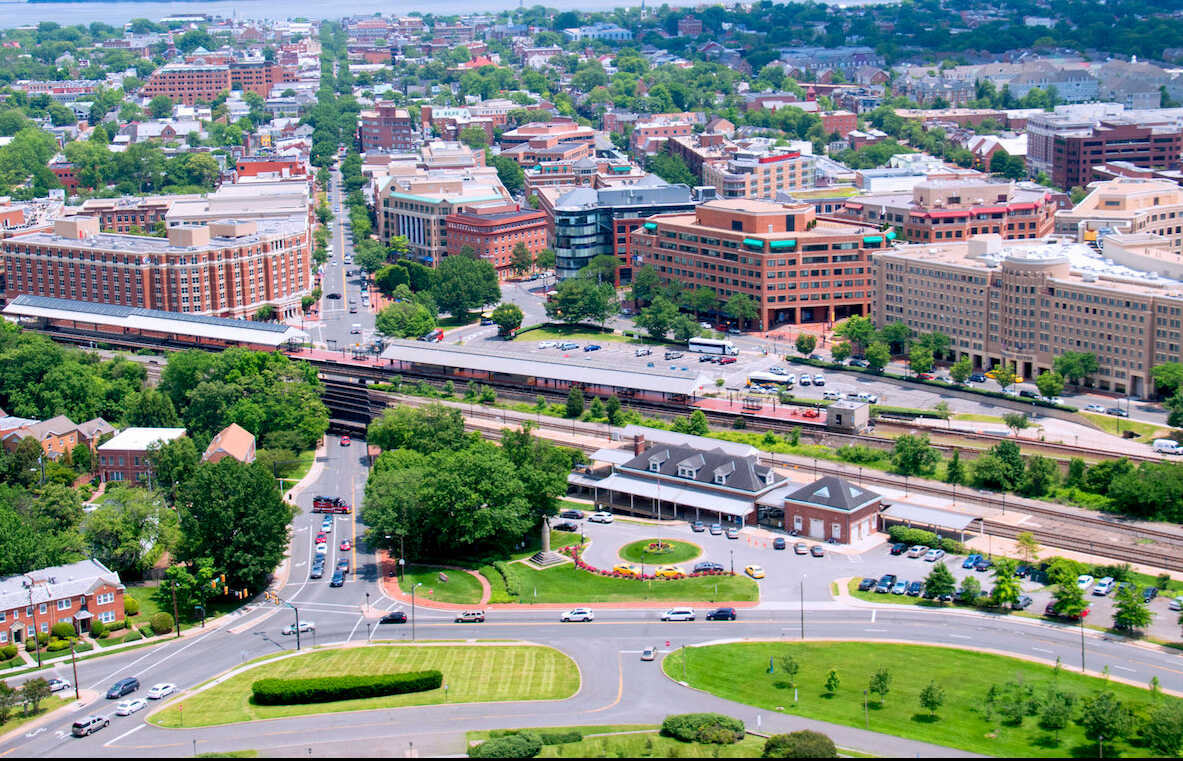 Hey, you found me! If you need to park, there is ample street parking and parking garages nearby. But, whatever mode of transportation you used to get here, a great starting point is on Shuter’s Hill on the grounds of the George Washington Masonic National Memorial, located off of Callahan Drive. Walk up the steps and sidewalk and meet me in front of the George Washington face on the memorial’s entrance wall. 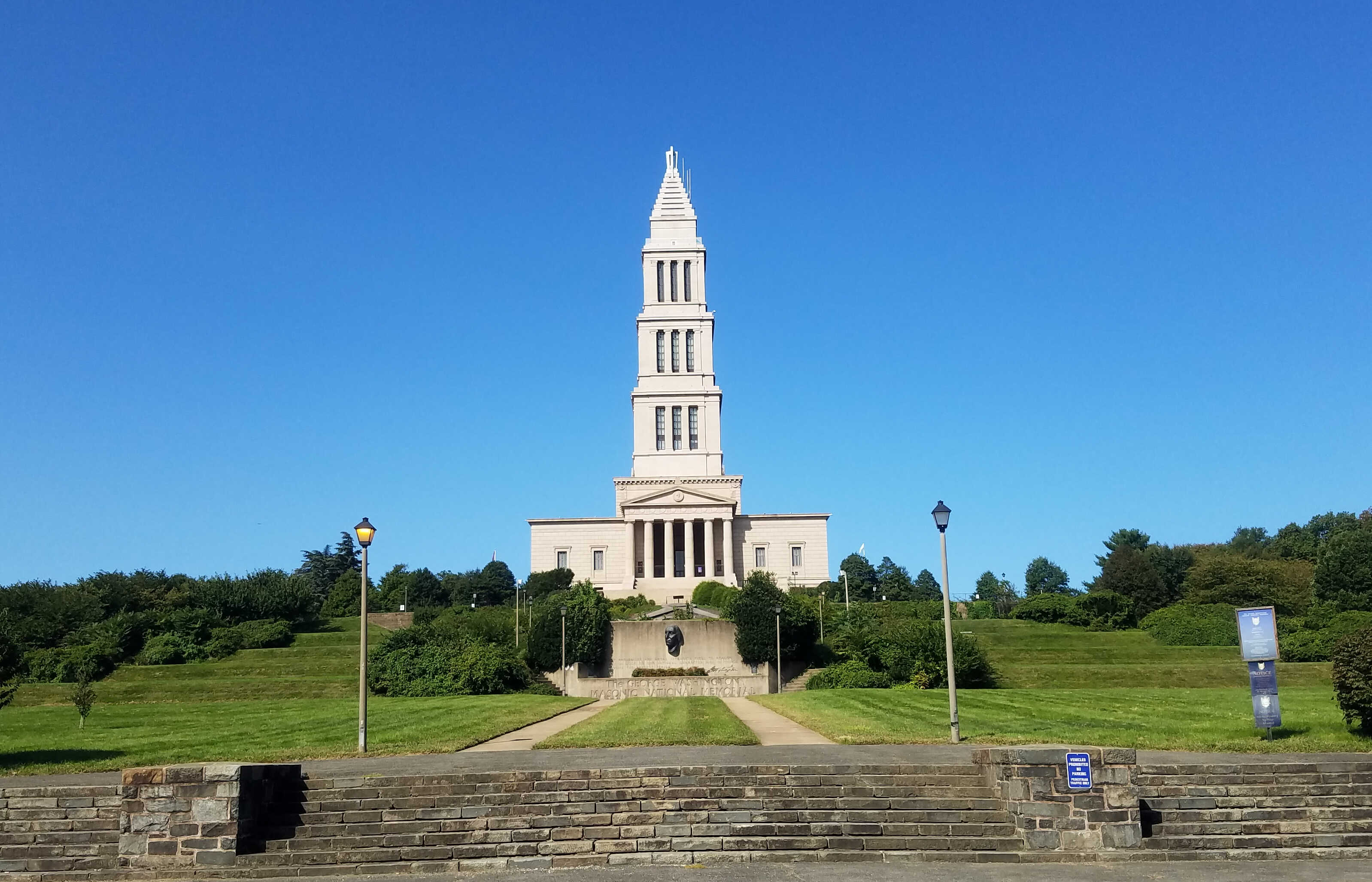 Like Benjamin Franklin to Philadelphia and Alexander Hamilton to New York City, Alexandria has always been known as Washington’s hometown. With his home Mount Vernon just eight miles south of here, more than 140 locations in present-day Alexandria are linked with him. It was he who put Alexandria on the map – literally. As a 17 year old surveyor, he helped lay out its streets, surveyed its lots, and drew its first map in the 1750s. He maintained a townhouse, received his mail, purchased his supplies, sold his goods to market, and established the first public school. He was one of the town’s early trustees, a depositor and patron of the Bank of Alexandria, worshipped at Christ Church, and organizer of the first volunteer fire company. Like many of the Founding Fathers, Washington was a member of the fraternal order of Freemasons even serving as First Worshipful Master of Alexandria Lodge of Masons No. 22, which makes its present home inside the 333-foot tall George Washington Masonic National Memorial you see towering on the hill. Dedicated in 1932, the 200th Anniversary of his birth, the lighthouse-like structure marked a collaboration of Masons across the country who sought to honor their fellow Mason and his views on government, religion, and freedom. The Replica Lodge Room preserves and presents valued Washington relics now owned by the Masons, including his bedchamber clock frozen to the time of 10:20 pm, the moment of his death on December 14, 1799 and the ivory handled trowel his used to lay the cornerstone of the US Capitol Building on September 18, 1793. Memorial Hall has a 17-foot bronze statue of Washington sculpted by Bryant Baker and dedicated by President Harry S. Truman in 1950. Murals by Allyn Cox depicting highlights from Washington’s life surround the room. The memorial’s upper levels feature numerous rooms and displays. The Royal Arch Room contains a replica of the Ark of the Covenant, as well as Egyptian and Hebraic Art. The Assembly Room showcases dioramas of events in George’s life. The Tall Cedars of Lebanon Room features a model of King Solomon’s Temple, and the Children’s Room shows a miniature moving Shriners parade accompanied by music. The George Washington Museum features artifacts from Mount Vernon personally donated by family descendants including the 1732 Family Bible. An outdoor observation deck on the very top offers stunning 360-degree views of Old Town and the surrounding region. Lastly, you have noticed the massive concrete sculpture with the letter “G.” Designed in 1999 by Donald Robey to mark the 200th anniversary of George’s death, the “G” in the Masonic emblem is said to stand for devotion to God and also for their interest in geometry. Surrounding the “G” are a square and compass, two essential tools for a stonemason. The square, originally used to check two faces of rock for accurate shape symbolizes “squaring” a person’s behavior in the presence of God and humanity. The compass is said to remind a man to keep himself in check, and not to overindulge in life’s vices. Now, let us proceed to our next destination. As go you back down the sidewalk and steps, hang a left to head over to the sidewalk along King Street.