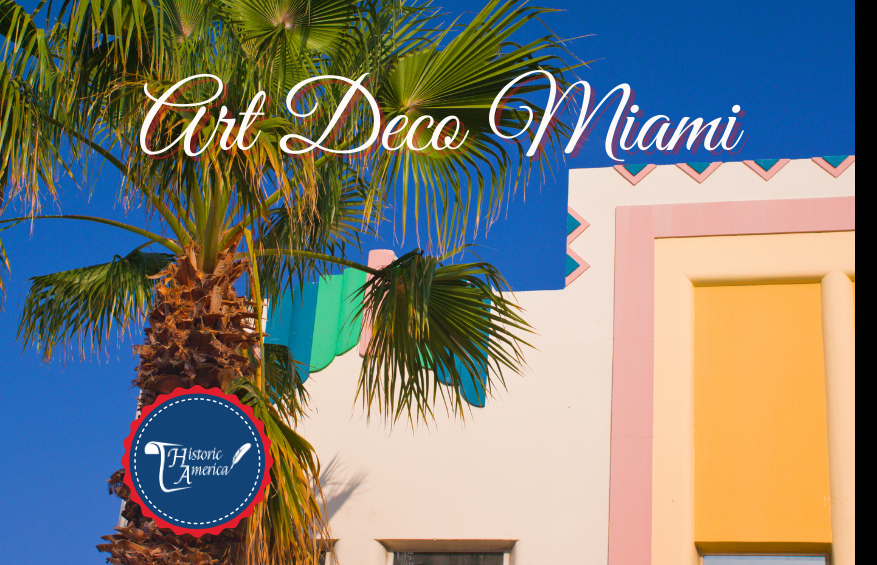 Explore the iconic Art Deco District with Historic America! The district is home to the largest concentration of Art Deco buildings in the world. That’s exciting for architecture buffs, but it’s also pretty impressive even if you’re not super into design. The creamy pastels, neon lights, and bold geometric designs will undoubtedly win you over. We’ll start on Ocean Drive, with the sandy beach on one side, and a long strip of bars, shops, restaurants and hotels on the other. Our tour will immerse you in the heart of South Beach, showing off the architecture and transporting you to a bygone era. Picturesque as a postcard, seeped in fascinating history, and constantly buzzing with energy, the Art Deco district is a Miami must-see-- and we can’t wait to share it with you! #historicamericatours 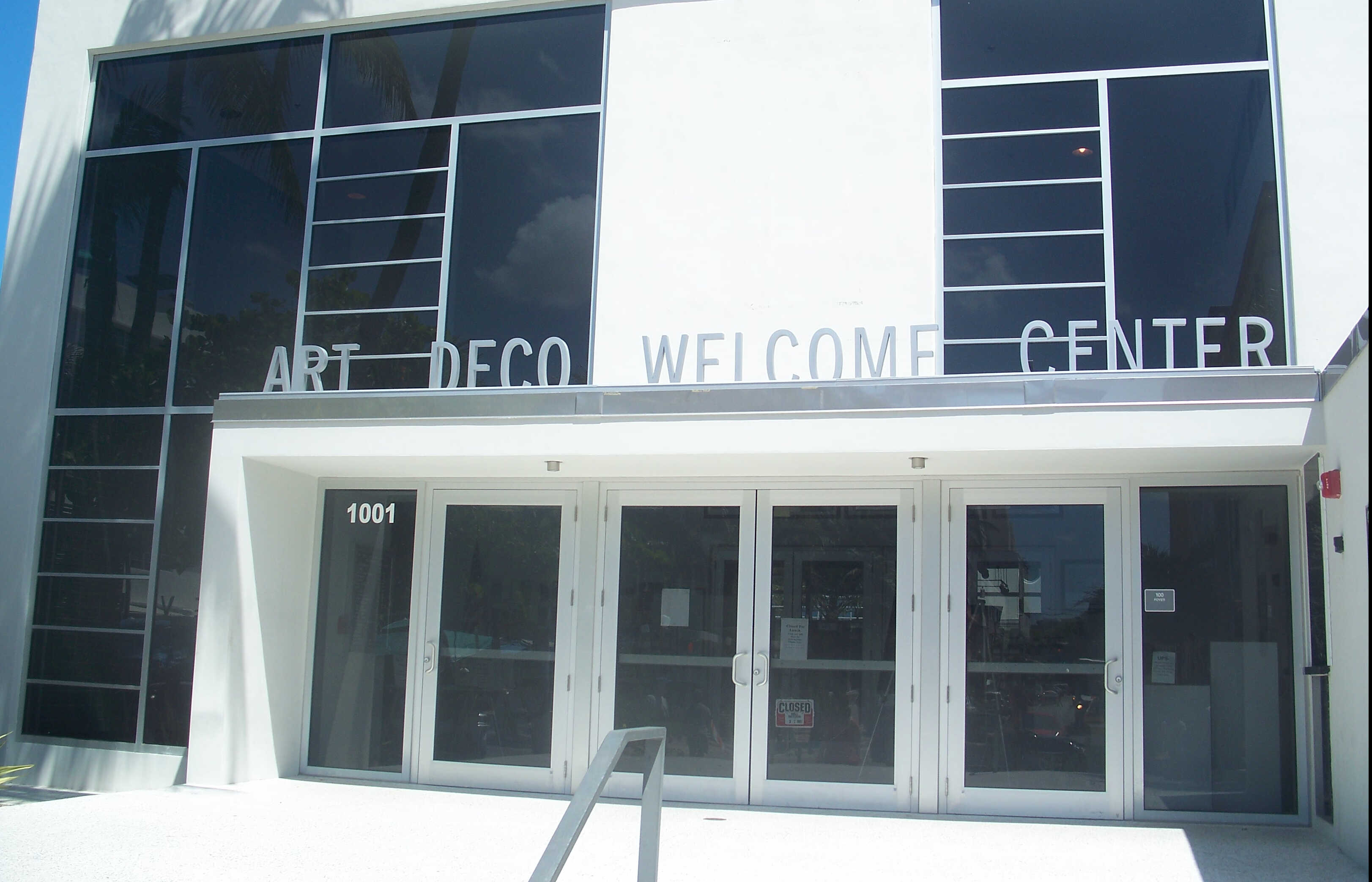 Welcome to Historic America’s tour of the Art Deco District. My name is Rachel and I’ll be your guide today. You are standing within the largest concentration of Art Deco buildings in the world. Whatever mode of transit you used to get here, you should find yourself between 9th and 10th streets on Ocean Drive, in front of the Art Deco Welcome center. This building will serve as an anchor for this tour, it is where we begin and also where we will conclude our time together. The center is overseen and operated by the Miami Design Preservation League, a group dedicated to preserving the unique architectural style here in Miami Beach since 1977. The preservation league is the reason Miami still oozes 1930s glamour, it’s oceanfront still lined with fabulously colorful buildings, sporting intricate detail and fascinating decor that offers us a glimpse of a bygone era. So, what exactly is Art Deco? And why is there so much of it in Miami? Art Deco was a form of artistic expression popular in the 1920s and 1930s as the most bold and modern style of the time. Like many symbols of style and fashion, Art Deco originated in France, gaining its name from the Exposition Internationale des Arts Décoratifs et Industriels Modernes held in Paris in 1925. Art Deco architecture is characterized by overall symmetry, stepped rooflines, glass block, decorative sculpture panels, terrazzo floors, curved edges, and neon lights. Art Deco features hallmark designs like ‘the element of three’ and ‘eyebrows’, don't worry, I’ll be sure to point out a few fine examples of these on tour today. To draw to mind a familiar example of Art Deco architecture, picture the Empire State Building in New York City. The characteristics of Art Deco are clash of opposites, the simple and the complex. Both of these defining features were designed to challenge and overthrow the Edwardian-esque style of the first two decades of the 20th Century. If you’re unfamiliar with Edwardian style, think of the first two seasons of Downton Abbey. We will answer the ‘why Miami’ question shortly, but for now let's make our way to our first historic stop. For this stretch of the tour, we’ll stay here on the Ocean side of Ocean drive and I’ll tell you about the buildings on the city-side of the side of the street from a bit of a distance. With the entrance of the Welcome Center at your back, cross 10th st, I’ll share our next stop with you about halfway down the block. Go ahead and cross 10th and walk until you hear my voice again

The Miami Foothold for a Cleveland Empire 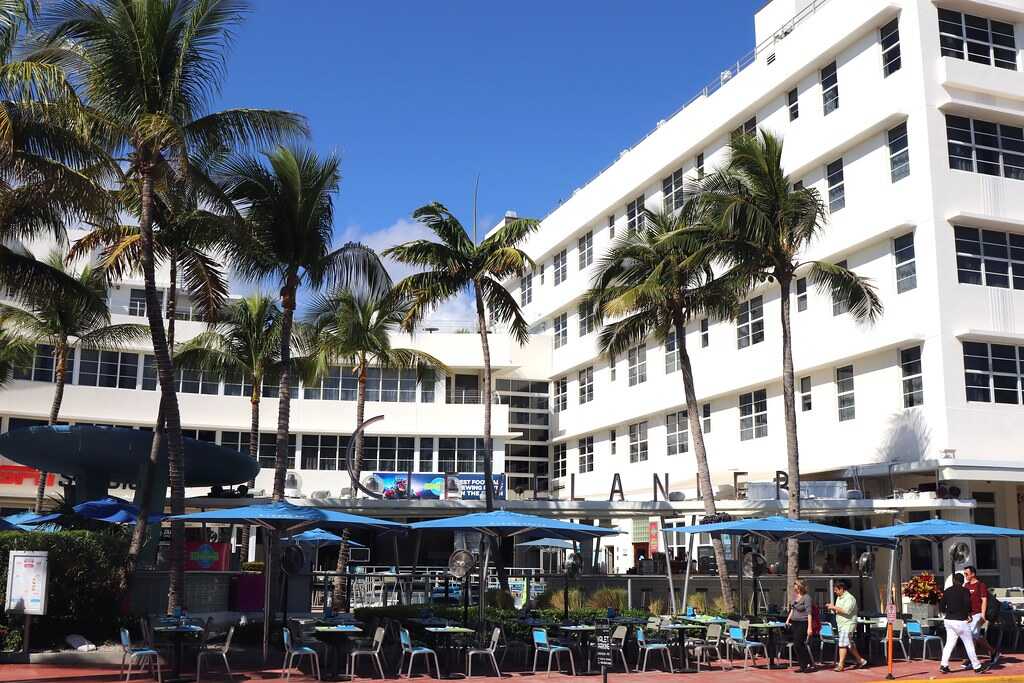 You made it! You should have the Pacific Ocean behind you, and the city before you, as you look across the street, settle your gaze on the large white building. If the sun truly is beating down, feel free to stand underneath some shade while I tell you the story of the Clevelander Hotel. The Clevlander is an iconic destination here in Miami, much the same way as The Plaza Hotel is in NYC. It made several cameos in the 80’s crime drama television series, Miami Vice. Let’s look through a Deco lens, notice the curves and their contrast to sharp edges. This represents the polarized characteristics that define so much of Art Deco style. The hotel was built in 1938, designed by Miami-based architect, Albert Anis. Anis was from Florida, but worked much of the previous two decades building in Chicago. He was poised to embrace the Art Deco boom as it blossomed in his hometown. So what’s with the name? This hotel was designed by Anis but it was owned and financed by the Rattner family. If you happen to be from Cleveland, Ohio, the name Rattner should sound familiar. The Rattner family, immigrants from Russia in 1920, began Cleveland’s Forest City material, which became Forest City Enterprises, a real estate powerhouse in the Cleveland area. The Clevelander Hotel was an attempt by the Rattner’s to expand their Real Estate empire into the burgeoning Miami Beach area. Though the company no longer owns it, the hotel retains the name, and the Clevelander was the footstone from which the Rattner’s were able to build the nationwide real estate holdings they have today. Today, the Clevelander is still one of the hottest spots in town. You don’t have to wait for neon light to glow pink to get the party started, in true Miami fashion, there is no bad time to turn up at the Clevelander. It features a stylish open air patio bar and a nightly schedule of live entertainment including live DJs, fire shows, and go-go dancers. Now that we’ve seen a good example of Art Deco, why is there so much here in Miami? How did this once swampy, mosquito infested stretch of coastline turn into an architectural treasure trove and playground for the rich and famous anyway? In 1910 a serial entrepreneur and accomplished visionary, Carl Fisher, discovered this coastline while vacationing in the sunshine state. He pictured a drastic transformation for the 3,500 acre landmass and kicked off his grand plan by purchasing a home here in 1912. He was determined to build a billion dollar sandbar for the wealthy elite and Hollywood crowd. Eyes ever on the prize, he bought more of the land and financed the draining of the Biscayne Bay, bulldozing the native mangroves forests and replacing them with sand, creating the now iconic South beach shoreline. By the 1930’s Fisher’s little slice of paradise was fast becoming the fashionable vacation destination he had envisioned. Despite a devastating hurricane in 1926 and the financial repercussions of the Great Depression, the lure of Miami Beach only continued to grow. Luxury hotels popped up all along the coastline, all in the style du jour, Art Deco. Like all trends, Art Deco’s allure faded and made way for the post-war Mi-Mo movement, and new construction left these ocean front properties to disrepair and neglect. In the 50’s new constriction like the bowtie shaped complex, the Fountainbleau drew the stars and elite a bit north of here. Suddenly the 3 story deco darlings, seems far less attractive than the glamorous high rises of north beach. By the 70’s, many of the hotels were converted to retirement homes and south Beach became the butt of many jokes, the Miami Herald calling it “heaven's waiting room” and legendary comedian Lenny Bruce said “it’s where neon goes to die”...but in the 80’s, South Beach made a comeback. Thanks in large part to the activism of Barbara Baer Capitman, the founder of the Preservation League. She even got Andy Warhal down here to bask in the Art Deco greatness. The comeback is also thanks to that hit show I mentioned...Miami Vice. The film Scarface also added to the city's revitalization as an exotic and glamorous destination. Let’s continue our tour! If at any point you’d like to pop into a lobby or a bar or simply cross Ocean Drive for a closer look or better picture, please feel free. Just remember to cross back over to this side of the street in order to resume the audio prompts. When you’re ready, let’s head to our next stop. Continue up Ocean Drive and cross 11th street, I’ll meet you a bit beyond the intersection, so cross and keep walking until you hear me.